The Rameau Project team played a major role in the BBC’s Rameau anniversary coverage during 2014. In addition to a feature on Radio 4’s Today programme, Edith, Graham and Jonathan contributed to almost seven hours of broadcasts:

Music Matters, Radio 3 (broadcast date: 26 April 2014)
In April, Jonathan and Edith appeared on Radio 3’s Music Matters to talk with Tom Service about their work preparing for the UK première of Rameau’s Zaïs. Listen on the iPlayer (from 32:35 onwards) here: http://www.bbc.co.uk/programmes/b041vf8m

Who does John Hegley think he is?, Radio 4 (broadcast date: 8 & 12 July 2014)
Jonathan and Edith appeared on Radio 4 in early July to discuss Rameau with poet and performer John Hegley. John, who has long believed himself to be descended from Rameau, set out to discover the truth. We hear the fruits of this endeavour, what John thought of the OAE’s performance of Zaïs, and reflections through music and poetry of the inspiration John has found in his believed connection to his ancestor. You can hear this charming, witty and poignant journey here: http://www.bbc.co.uk/programmes/b048l0gc 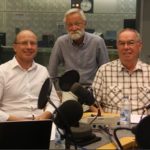