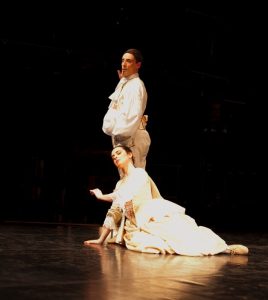 Some of the most compelling of questions about the performance and understanding of Rameau’s operas concern the role played by dance and pantomime:

The use of movement in Rameau’s stage works goes far beyond providing spectacle: it is an integral element in conveying the narrative. With dance sequences forming as much as a quarter of a Rameau opera, this has proved problematic in modern times. Recent productions at two major British opera houses – the first Rameau for both companies – are representative of two current approaches, each linked to the producer’s overall concept of the work: either to employ modern choreography (as for Jonathan Kent’s Hippolyte et Aricie at Glyndebourne in 2013); or to remove dance almost entirely (as for Barrie Kosky’s Castor and Pollux at ENO in 2012).

The Rameau Project is therefore exploring the choreographic idioms and approaches to staging that might have been employed at the Paris Opéra during the three decades Rameau worked there. With none of the original choreography existing, this is no easy task; it requires the application of the same rigour to the study of stylistically-appropriate performance of dance that has been applied to the music of the period. It depends on the conductor and choreographer working closely together to unlock the contemporary sources and to integrate the work’s musical and choreographical vocabularies. It demands that we understand the aesthetics and influences which shaped the operas and it draws attention to the indispensable role that gesture and movement must play if our understanding of these works is to progress.

In implementing such an approach to this ‘problematic’ genre so far, our belief in Rameau’s opera has been affirmed and, as the wealth of its sophistication becomes ever more apparent, our respect and admiration for Rameau and his team has deepened. What is more, any concerns we had that Baroque dance would not speak to a modern audience are being dispelled. The process is proving to be revelatory for us and everyone involved.