The Project has been involved with the performance of five Rameau operas.

The modern première of Anacréon (1754) with the OAE

The Orchestra of the Age of Enlightenment with Consort Iridiana and the Men of Magdalen College Choir
with Matthew Brook (Anacréon), Anna Dennis (Chloé) & Agustin Prunell-Friend (Batile)

Reconstructed by Jonathan from manuscripts scattered among Parisian libraries, and now published in Bärenreiter’s Opera Omnia Rameau, Rameau’s Anacréon (1754) was given its first complete performance in 250 years by Jonathan and the OAE in Oxford’s beautiful Sheldonian Theatre. It was the success of this performance - described in Opera Magazine as ‘colourful and arresting… full of energy, caprice, novelty and depth’ - which led to the creation of the Rameau Project.

The British première of Zaïs with the OAE 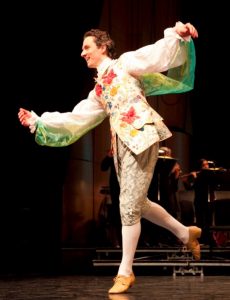 Thanks to a six-figure award from Oxford University’s John Fell Fund, the Rameau Project undertook a nine-month project to develop research processes, dance expertise and the model of engagement between the University and the OAE. This research was focussed through the preparation and performance of the ballet héroïque Zaïs (1748) and culminated in the British première at the Queen Elizabeth Hall on 27 April 2014. The version performed was the Easter 1748 version as found in Graham Sadler’s OOR edition, and a new surtitle translation was prepared by Paula Kennedy and Jonathan Williams. The performance featured 50 minutes of choreography created by Edith Lalonger in an eighteenth-century style. Of the 250 dancers who applied to take part, eight were eventually selected to be part of Les Plaisirs des Nations troupe: Annabelle Blanc, Adeline Lerme, Fenella Kennedy, Flora Sans, Ricardo Barros, Damien Dreux, Hubert Hazebroucq and Guillaume Jablonka. The event enjoyed critical acclaim and was enthusiastically received by the capacity audience.

The performance was featured on Radio 3’s Music Matters – listen to Jonathan and Edith in conversation with Tom Service here (from 32:35 onwards) here http://www.bbc.co.uk/programmes/b041vf8m

Building on the success of Zaïs in April, Jonathan and the OAE returned to the QEH in October to perform two of Rameau’s one-act ballets, Pigmalion and Anacréon (1754). The inaugural concert in the OAE’s 2014-15 prestigious South Bank Series, this event was a fitting celebration to crown the Rameau anniversary year and was enthusiastically received by the capacity audience. Jonathan’s programme notes for this performance may be downloaded here. 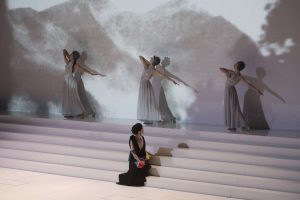 The Baroque Orchestra of the Royal College of Music, soloists from Académie de l’Opéra national de Paris and the choir of the Centre de musique baroque de Versailles

The result of the remarkable collaboration between three historic institutions, this production brings one of Rameau's most popular works during his lifetime back to the Paris stage for the first time since the eighteenth century, and for the first ever to the UK.

My programme notes are available to download as a pdf here.

Please see the Media page of some video footage of the show, and here for what the press said...
My programme notes are available to download as a pdf here.