~ ‘Music, dance and narrative in Rameau’s Zaïs: bringing the immortal back to life’ in Journal of Dance Research (Vol. 33 no. 2, November 2015)
~ A special Rameau anniversary edition of Early Music (November 2016)
~ An edition of Rameau’s Anacréon (1754), series IV volume 25 of Opera omnia Rameau, published by Bärenreiter (2004)

A CD of Anacréon for Signum Classics, the first studio recording of a Rameau opera in the UK for 30 years. 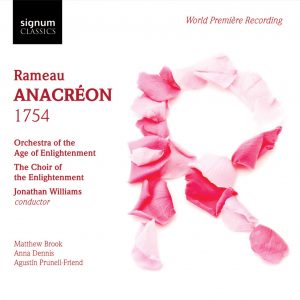 ‘In this first recording the opera makes a delightful discovery, telling its gentle tale of a love triangle in the ancient poet’s garden with typical Enlightenment grace. Anna Dennis, Agustin Prunell-Friend and Matthew Brook are the genial singers. Williams conducts the OAE and its choir with bright-eyed energy and finesse.’
Richard Fairman, Financial Times (September 18, 2015)

Thank you Simon Heighes for picking Anacréon as one of your top recordings of 2015 – the OAE and I are delighted! Listen to Simon in conversation with Radio 3’s Andrew MacGregor here.